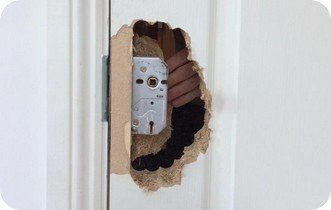 (Tip of the hat to Intervirals for this one.)

That’s the situation that yesterday befell Twitter user @toddlerlex. He had a phone with a charger and good reception, so he contacted friends at 7am and the word got out, mostly through social media. He covered the five-hour saga in great detail, attracting the attention of even Mark Gatiss (former Only Connect contestant, among his many other claims to fame). The story reached Metro, the Australian media and doubtless many other countries.

It transpires that the door slammed overnight, breaking both lock and key. Even unscrewing both halves of the lock from the door (and the door handle) proved insufficient and power tools to drill the lock out were necessary. The full story, along with the social reaction, are thoroughly detailed, with – ahem – the full details of the most pressing concerns when trapped in a room with no toilet.

Lex very kindly and gamely revealed that the game in question was The Life and Death of Paul Marrane; not an exit game as such but this site has covered it before, along with the company’s previous work. Despite – or, though surely not, because of? – the day’s earlier travails, Lex loved it!

This all happened in Islington, so London exit games might want to get in touch while Lex remains famous for his escape exploits…!