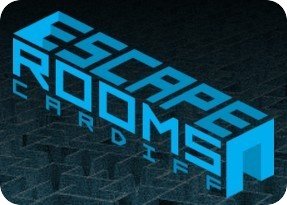 Go half-way between Cardiff Castle and the Millennium Stadium (or the Principality Stadium, as it now apparently must be called), face east and go forward the length of a hefty up-and-under. You’ll be within a drop-kick of the first- and second- floor location of Escape Rooms Cardiff, which opened today. The site has opened with three different rooms, each of which have a one-hour time limit and are designed for teams of two to five. The web site’s graphic design is gorgeous with one of the best logos in the land.

The Finding Sherlock game is rated as the easiest of the three and recommened for teams of three. “This is the private office of the world famous Sherlock Holmes. He’s gone missing during an investigation and you must solve the clues that he’s left for his trusted friend Dr Watson. Can you complete the trail of clues and make it out in time? He’s counting on you.”

A shade more difficult, the recommended team size for The Tomb is four players. “Stumbling inside the lost tomb of an Pharaoh, you set off the booby trap and you have 60 minutes before the walls come down around you! All the puzzles are from ancient times, so you have to think like an Egyptian if you want to get out of this one in time.”

Also towards the upper end of the spectrum, you’re recommended to have a team of five to take on The Heist and win. “You’ve broken into a museum to steal their prize possession. Split into two, teams will have to work together, work out the clues from the gallery to get through the laser trap and make off with the goods! It’s tricky! You’ve got 60 minutes before the police turn up!”

Prices start at £50 for a team of two and go up to £85 for a team of five. The site is set to open daily, with games beginning every 90 minutes between 9am and 9pm. All the nines; this site looks forward to seeing the reviews – hopefully the games turn out to be dressed to the nines!