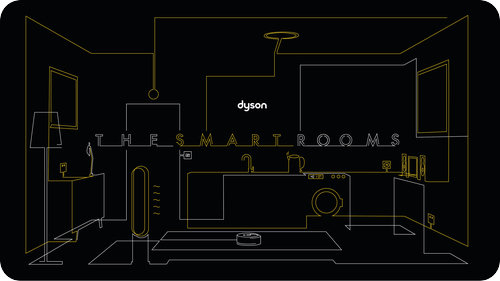 Dyson, manufacturer of remarkable cyclone-generating motors and devices in which they might be found such as vacuum cleaners, have been involved in some unusually interesting projects over the past few months. The first was a deliberately short-lived ARG called Rethinkers and the credit list contains some of the most celebrated names when it comes to integrating stories and games, one of whom was responsible for a very highly celebrated escape room. While the game is now history, probably the best place to find out about it is the appropriate subreddit.

This isn’t Dyson’s only adventure, though. At least some of the people involved in that campaign are also involved in a follow-up campaign called The Smart Rooms. This saw Dyson release a video featuring snippets of code that could be assembled (both literally and figuratively) to generate a password which might earn you access to visit The Smart Rooms themselves. These rooms will be in place in Brixton over the coming two days and every place has been booked. In context, these rooms are set to bear some similarities to a traditional escape game, but there will be an “Internet of things” / “connected house” theme and an unusually heavy focus on software engineering challenges. Indeed, the presumed reason why Dyson are going to these lengths is to capture the attention of talented software engineers and inviting them to apply to work for them. Success in either game does not guarantee employment but would surely be a feather in the cap.

This weekend’s play has another twist – and, very unusually, the best place to find out more is an article in The Sun. The players’ progress will be streamed live on Twitch as they take part; struggling players may ask viewers for help, indirectly, by indicating four words or four objects and inviting the world to vote on which appears the most relevant in the situation. Hopefully the world will decide to be helpful.

So even if you aren’t getting to play in person this weekend, perhaps you can still get to play along. Follow Dyson and their social media this weekend for the action as it happens!

Register soon for The Hunt for Justice!