Notably tougher than usual for strong contenders – indeed, arguably the toughest yet – but only about as tough as usual for the rest of us.

It’s tempting to say “There, done” and move on, but the conclusion is an unusual one and worth explaining. As ever, the most important thing is a rousing round of thanks to everyone at the UK Puzzle Association (hereafter UKPA) for putting the championship together year after year, from the puzzle authors (from around the world!) to the test compilers to the system administrators.

How would you compare the difficulty of one year’s championship to that of previous ones? The analysis I’ve performed in the past compares what sorts of scores people are getting year on year, expressing the scores as rebased percentages, with a score of 100% representing all the puzzles being solved within the time limit. (If you do solve all the puzzles correctly within the time limit then you earn bonus points depending on how much time you have left, which rebases your score to one of over 100%.) 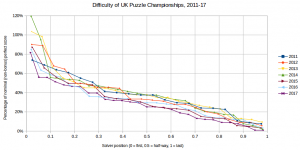 Click on the image for a bigger version of the graph

The small version of the graph isn’t the clearest, but the large version is much more so. This year’s data is represented as a purple line. The purple is unfortunately fairly close in colour to the 2015 brown line, but each year uses a different shape of data marker, and the 2017 data’s marker looks more like a cross than any before it. The other way to recognise the purple line is that it’s almost always at the bottom of the graph.

I’m not too worried by this conclusion, as there’s a clear reason why it’s not comparing like with like. Previous UK Puzzle Championships have allowed participants 2½ hours to complete the paper, whereas this year’s championship only permitted participants two hours. While it would seem reasonable to assume that people will have sufficient clue about where their strengths and weaknesses lie to imagine that they would be broadly unlikely to be able to score as many points in the fifth half-hour as in the half-hours before it, I get the impression that had everyone been allowed 25% extra time, scores would have been higher across the board. Maybe not commensurately higher, but probably not far off. This would have put the line in or near the pack, rather than being a low outlier. So I asked why this year’s event was shorter, and the answer is reasonable.

There’s no particular reason why the UK Puzzle Championship has to be any particular length, and my gut feeling is that it had previously settled on a 2½ hour duration because the US Puzzle Championship that has run for almost 20 years has traditionally been 2½ hours long. (The very early days may have been longer still – but the very early days were conducted by fax, rather than online.) The longer the test, arguably the closer it comes to replicating the several hours per day of puzzles at the World Championship, and arguably the more accurate a job it does at declaring a champion; the longer the test, the more work there is involved in its creation and operation, and the more off-putting it may be to more marginal participants.

It is to be noted and celebrated that there were a record 29 UK participants on the scoreboard this year, with the previous best being 25 in two separate years. It’s also worth noting that there weren’t any UK participants who started the test and then failed to submit a single correct answer; if there’s something to moderate the joy at the UK record of 29, it’s that last year had 25 on the scoreboard plus another five zeroes. Are people who don’t answer even a single puzzle correctly of use or interest to the UK Puzzle Association? Probably not in terms of trying to pick a representative team for a world championship, perhaps more so in terms of creating a contest where people enjoy themselves, no matter how marginal the participant, and then come back year after year and tell their friends about it. 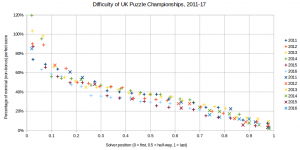 Click on the image for a bigger version of the graph

Again the thumbnail says little, but the larger version paints a picture. For each of the previous six years, the data from the above chart is replicated but the data points are either pluses or crosses. (There are no lines. I can’t work out how to make the lines do what I want them to, and I can’t work out how I did it last year.) A plus represents a player who came back in at least one successive year; a cross represents a player who has not yet made another appearance.

Accordingly, this year’s data is not yet included as we won’t know until 2018, or later, who will return from 2017. There are sporadic crosses towards the top from time to time, but the vast majority of crosses are towards the bottom of the chart. The other way to look at it is that the UKPA does very well at retaining the middle of the pack from year to year!

My views are largely the same as last year. I think increasing the number of participants has to be a major goal for the UK Puzzle Association, perhaps close to the most major goal. Noting that, happily, newspapers are more frequently starting to publish a more interesting variety of logic puzzles, I’d be inclined to make sure that there is reasonably heavy representation of deliberately very accessible puzzles every year, both accessible in terms of style and familiarity as well as difficulty. This is part of the reason why I so heavily promote the WPF Grand Prix’s “Paper C” puzzles.

Nevertheless, the UKPC remains my favourite online puzzle contest of the year. Thanks again to everyone for keeping it that way!