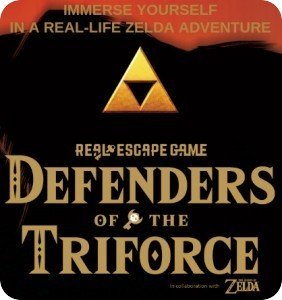 It’s a cute coincidence that this is the second consecutive post about a fantasy-themed live action team puzzle game, but no more than coincidence; I only found out about this earlier today, with a tip of the hat to Thomas from London Escapists.

The very first post I ever made to dear old Exit Games UK touched briefly on the history of the genre, pointing to Japanese Wikipedia’s suggestion that the first known game, as a commercial enterprise, was run by a company known as SCRAP in Kyoto in July 2007. (Happily, a tenth anniversary celebration is planned.) SCRAP use the English-language brand name “Real Escape Game” for the games they have run, and licensed to be run, around the world, with games notably played in the US, in France and in Spain. They run Real Escape Rooms, which the rest of the world have followed somewhat closely in their format, but they also run Real Escape Games, where many teams participate at once, in a larger location, in parallel. Today the world discovered that one such game is coming to London for three days in July.

Real Escape Game are bringing their latest such game, Defenders of the Triforce, to London on July 14th, 15th and 16th! “This is not an escape room, it is more than that. Solve puzzles together with other teams, in a huge area, all within a set time limit. Interact with classic items and characters seen in The Legend of Zelda series like the Goron, Zora and Kokiri tribes.”

Another page on the site says more: “There will be multiple teams during each game, all trying to escape. Players are encouraged to communicate frequently and divide tasks efficiently in order to solve all the puzzles before time runs out. If you are a person who likes answering riddles, solving complex puzzles, or are just looking for a good mental challenge, this event is for you! This is NOT a maze or traditional escape room! It is a fully hosted, story-based escape event designed for puzzle fans and fans of the Zelda franchise.”

The game has been running in North America already, and it is suggested that the game does not particularly vary from location to location, so without wishing to prejudge the game, the reviews seem reasonably likely to be representative. You can find non-specialist perspectives from teams who played from many sources including Engadget and The Verge, or you may prefer more specialist perspectives from Room Escape Artist or Escape Room Tips. SCRAP’s games have tended to really split the audience, critically, but this is about as well-received as I can remember any of them being.

If you’re a fan of Zelda, all indications are for a recommendation to book without delay. If you’re not, don’t be put off, but set your expectations to something that’s somewhere between a room escape game and Puzzled Pint; take a look at the reviews and see whether it’s worth the money to you. Either way, many thanks to SCRAP for taking a chance on the UK and I dearly hope that there are many more events like this in the country in the months and years to come.

Did DASH 9 leave you wanting more?

The DASH data, after DASH 9